Entertainment & ArtsMagazine
May 26, 2022
While Indian Fashion designers are happy with the way Sari has yet again taken the center stage, some feel that Stylists could have done a better job with some celebrities. 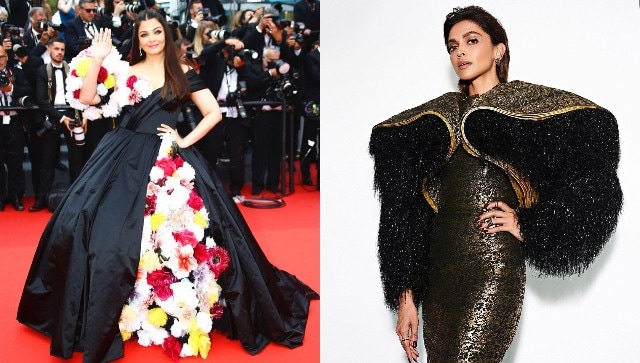 Fashion is back in French Riviera with the 2022 Cannes Film Festival, which has officially kicked off on May 17 and will go on till May 28. After two years of a halt because of the pandemic, the 75th edition was the perfect opportunity for celebrities from across the globe to flaunt their best fashion game.

For the film industry’s biggest event, some of the renowned names from the film fraternity showcased a gamut of trends, including sparkles, vibrant colors, structured silhouettes, and cutouts. India is equally shining this year too with Bollywood face Deepika Padukone making her debut as one of the members of the Cannes jury and stars like Aditi Rao Hydari walking the red carpet for the first time along with veterans like Aishwarya Rai Bachchan.

While Deepika Padukone, who is part of the nine-member jury at Cannes this year, completely sashayed the red carpet in her Louis Vuitton outfits on several occasions, she too flaunted an Indian sari with aplomb during her initial appearance. Aditi Rao Hydari, too, opted for a Sabyasachi Mukherjee sari as her first look. Aishwarya, who has now returned from the gala, chose a customized design from Indian designer Gaurav Gupta during one of her appearances.

For designer Neeta Lulla, the mix of much loved Indian brands and international luxury brands worn on the red carpet this season is a breath of fresh air. “There have been a few hits and misses, but what is fashion and style if you are not having fun with it,” she told Firstpost when asked about her viewpoint on the fashion of Indian celebrities on the Cannes red carpet.

She also said that the sari has always been in Vogue and people here and abroad and extremely appreciative of its elegance and beauty. “Deepika wearing a saree in Cannes this year took me back 20 years when Aishwarya had done the same. Always iconic,” said Neeta, who has styled Aishwarya for Cannes in the past.

She added that having fun in any outfit should be the most important element while dressing for the red carpet. “It is a very high-pressure moment with a thousand cameras pointed at you from the moment you step on the long walk to the stairs and If you are not feeling your best then It shows,” she said.

Sari since time immemorial has been the most favoured garment for Indian women and it’s heartening to observe it being displayed at global events with panache and style and making the six yards aspirational and a style statement, says another designer Shruti Sancheti.

“We have already seen the western interpretations of this glorious draped garment and now I feel with so much exposure, globally it will be a coveted choice for formal events as kaftan is for lounging. It’s a matter of time when we see global celebrities wearing this for their appearances or events,” she told Firstpost.

However, she says that there is a thin line between being trendy and being over the top and some of our celebrities have gone overboard and over-enthusiastic in styling and makeup and the result is a lot of appearances went wrong.

“Also Red carpet does call for couture, but a bit of restraint could have looked better like Anne Hathaway or Julia Roberts,” she said.

Not just ladies of Bollywood, but even Indian men were taking the art and craft of the country to the Cannes red carpet. Dressed in traditional attire, the 11-member Indian delegation led by I&B Minister Anurag Thakur walked the red carpet at the inaugural Cannes Film Festival.

Designer Prreeti Jaiin Nainutia of the brand Nirmooha calls the sherwani look of Thakur, the Indian formal way of dressing. “We wear it for any and every grand Indian function including pooja to weddings so it’s a very versatile garment and perfectly adequate for a red carpet.” She, however, personally liked Rahi Chadda’s androgynous look, which included a black suit with a sheer shirt.

“Perfectly classy and encapsulated his flare,” she told Firstpost. Some designers were impressed with fashion blogger Masoom Minawala’s looks included an all-pink Valentino look on day 1, followed by her ‘desi’ look in Amit Agarwal outfit on day two and then a gown for another outing.

“More than any celebrity this year, influencers such as Rahi Chadda and Masoom looked phenomenally well,” said designer Aniket Satam and added that even actor Pooja Hegde also looked refreshing and stunning at this edition of Cannes.

However, he says that some looks really didn’t make the cut.

He also suggested the stylists of these celebrities could support more Indian designers rather than one or two big designer labels and unknown Middle Eastern couture boutiques. “We as a country have much to offer and represent on such a global platform. We still dress as per the western gaze. We need more individualistic narration, reflecting their unique look rather than pluggish Collaboration with big global fashion labels. If nothing then simply wear Handloom or some Indian jewels on the red carpet and make a mark for example see Smita Patil and Shabana Azmi Ji Cannes images from the 70s,” he told Firstpost.

Even designer Varija Bajaj echoes similar sentiments. “Fashion trends reflect sentiments of consumers and society at large. After sporadic lockdowns and a volatile stock market, consumer sentiment is progressive and upbeat. We are witnessing creativity and novelty across industries. However, what I failed to understand was the Fashion showcased by Indian celebrities at Cannes,” she told Firstpost.

Bajaj says that while she takes full pride in some of her industry colleagues showcasing their designs on the red carpet, she is utterly dismayed by regressive and poor styling.

“The problem in fashion begins when it is cloned across bodies. It is a stylist’s job to customize the trend to an individual’s body structure, skin tone, and persona,” she told Firstpost and said that what one sees at Cannes was confused, outdated, and visibly poor quality.

Jr NTR gets emotional as he shares...

Pawan Kalyan and Sujeeth’s film gets a...