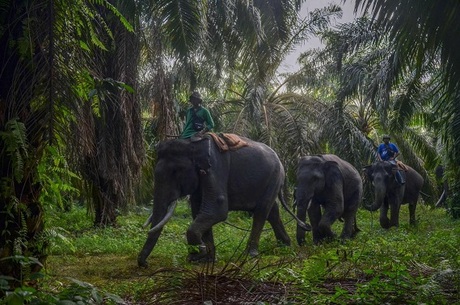 A critically endangered Sumatran elephant and its unborn baby were found dead from suspected poisoning in western Indonesia, a conservation official said on Thursday.

The carcass of the heavily pregnant mammal was found next to a palm plantation in Riau province on Sumatra, a large island home to some of the world’s rarest animals.

The archipelago nation faces an ongoing battle against wildlife crime and several elephant poisoning cases have been reported in recent years, including one in 2019 when a Sumatran elephant was found decapitated with its tusks ripped off.

A plantation worker discovered the mother, who was 22 months pregnant, on Thursday and immediately reported the carcass to authorities who collected samples before burying the body.

“We estimated the female elephant to be around 25 years old and during the necropsy test we found that it was pregnant and was close to giving birth,” said Hartono, the head of the local chapter of the Natural Resource Conservation Agency.

Officials are still testing samples to determine the cause of death, added Hartono, who like many Indonesians goes by one name.

They suspect poisoning because the mother was foaming at the mouth when she was discovered.

According to the World Wildlife Fund, Sumatran elephants are on the brink of extinction with only about 2,400-2,800 left in the world.

The elephant population is also threatened by rampant poachings because of their tusks, which are prized in the illegal wildlife trade.

Rampant deforestation has reduced the critically endangered elephants’ natural habitat and brought them into increasing conflict with humans.

Victorian and Tasmanian governments under fire for...

In Drought-ravaged California, Water Use is up...